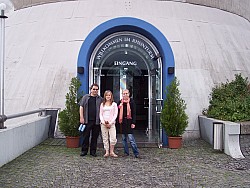 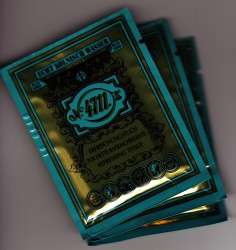 Onkel Heinz u. Tante Annemarie drive us to the Pulheim Straßenbahn. It’s a good thing that Tante Annemarie is with us in the car, because as Heinz was showing us how to purchase the tickets on the trolley, click-ding, the doors shut and we’re on our way. Heinz calls Annemarie to pick him up at the next station. :-)

It’s a straight shot through Ehrenfeld and into die Stadtmitte, where all the shops are um den Dom. We spend about 4 hours shopping, mostly in Kaufhof, where we also eat lunch at the top floor. It’s a very sausage-and-onion-y kind of meal. But we walk it off shopping as we walk toward the Dom, stopping in at the 4711 shop just before reaching den Dom. 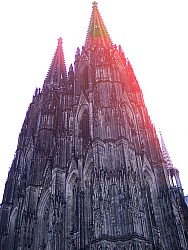 We visit the Dom on the way to Luciano’s. Big. Beautiful. Dark. The three kings’ triple-sarcophagus is closed-off from display about an hour before we arrive. We can only see it from a distance. After the Dom, mom visits the tourist bureau where she used to work long ago to find it being renovated. The guy at bureau points us toward Marzellenstr. where we easily find Luciano’s restaurant.

We arrive promptly at 18:00, while the staff is still eating and preparing to open. Luciano graciously seats us and talks for a while until Margot arrives. After a while we are treated to a wonderful sampling of Luciano’s favorites: thinly sliced prosciutto and thinly sliced veal in a white caper sauce as appetizers; fetuccinne, manicotti, and small canelloni, all bolognese or marinara covered; finshed with tiramisu or “the bomb” ice cream dessert. I can easily say that this meal beats anything we experienced in Italy.

During dessert, Luciano takes Kaitlyn and I in the wine cellar, where he showcases his wine collection, with some bottles 700 years old! He also makes his own vinegar, a family recipe. In fun, we receive some matches from him that are true italian: red, white (sort of), and green stripes of the flag. :-)

< Back
Mit Familie
Next >
Reminiscing
by:
Gary Faircloth
http://arkadianriver.com
Opinions expressed are his own and don't necessarily reflect the views of the company he works for or its members. Interests: tech, science, history, PC Gam...SQUIRREL!