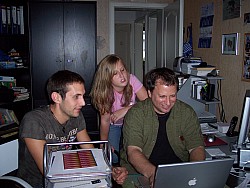 Marc is the first to arrive. He knows English very well and can communicate with Kaitlyn. This is good, because up to now it’s been almost solid German at the Bermüller’s. In fact, most of the rest of the week will be solid German. I usually get to be the translator. It’s fun.

Later, Noelle comes racing through, followed by Nathalie and Oliver. A little while later, Frank, Biggie, and their little girl Michelle arrive. After nachmittag cake and coffee, Kaitlyn escapes all the German gibberish by going up to play with the kids. But… it’s not much of an escape with these two non-stop maniacs. :-) A little later mom gets a surprise early visit from her long-time friend Margot with her man, Luciano. There were many tears of joy. 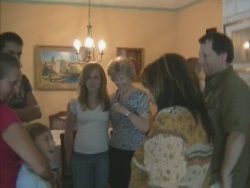 Meanwhile, after Frank u. Nathalie’s families have left, Marc spends time with Kaitlyn and me, having fun finding where everyone lives on Google Earth. Later in the evening he takes us to Kentucky Fried Chicken. I saw KFC in the Philippines, and here I see it in Germany. Now that’s globalization! They change the menu slightly though. Kaitlyn and I soon discover that an order of mashed potatoes isn’t a side order. It’s a huge portion served in a soup bowl. But, unlike in the Philippines, the chicken crust at this KFC tastes like the original recipe.

< Back
Take the Rhein to Köln
Next >
Downtown Köln
by:
Gary Faircloth
http://arkadianriver.com
Opinions expressed are his own and don't necessarily reflect the views of the company he works for or its members. Interests: tech, science, history, PC Gam...SQUIRREL!