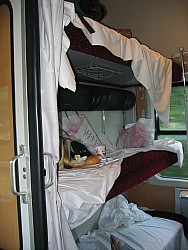 Stop. Click. Roll, roll, roll, CLANK! Okay, I’m a heavy sleeper. But somewhere around 4 AM we are in Salzburg changing engines, tracks, cars, …, who knows. After 15 minutes of fighting to not roll off the bed every time we stop, I decide that I must take a walk. I do and then find a comfortable empty cabin to sit for a while and watch the morning come upon us.

I return to the cabin as the controller is ordering the other couple off of the train. (They were trying to sneak on to Vienna because they were so tired and didn’t know what to do with themselves in Salzburg at 4 a.m.) She brings us breakfast. It’s only coffee and bread, but this coffee hits the spot. 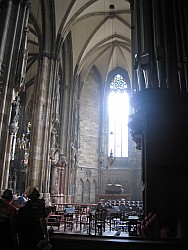 After arriving in Wien, I buy a map as usual and we go to the hotel, which is again across from the opera house, only three or four blocks from the train station. I’m beginning to think that Rick Steves likes opera, or all European cities are designed by the same people. ;-) We can’t check in so early in the morning, but the guy at the desk allows us to leave our luggage in the office. We go to Starbucks across the street. Inside we run into the same Canadian couple that we had met on the train from Rome to Venice. They were going to go to Switzerland, but have decided to come to Vienna to meet up with friends instead. Strange coincidence that we see them.

We walk towards Stephansdom. We are wanting to go to mass, but at 11:00 when we arrive, mass has already ended. We wander in the plaza on Kartner Straße and buy some Mozartkugeln at a chocolate shop. 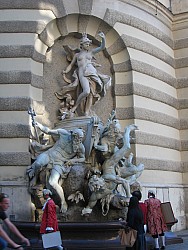 We notice lots of people around Vienna wearing 18th century outfits. We are about to walk into the Opera house to see if seats are available for Don Giovanni tonight when one of these dressed-up gentlemen stops to pitch us a different show. It is a variety of lighter classical and Viennese music, so we decide to do that instead of see the heavy opera.

The rest of the day before the show, we decide to take it easy. One of the maids check us in and show us to our room in the next building. I don’t mind saying, the maids here are pretty. The ladies at the Pension Suzanne stand tall and even wear those cute little frilly outfits. :-) 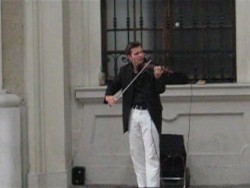 Sorry, I got a little side-tracked, there. After dropping off our stuff, we walk toward Josefs Platz and Hofburg, where mom is reminded by a poster that this is where the Lipizzaner horses are. She has always wanted to see them perform. We unfortunately don’t see any horses dancing, but we do see a guy made up to look like a white statue of Mozart, heh. There is also a guy playing electric violin who was fantastic. We arrive at Hofburg at 15:15, not realizing that they closed the crown jewels exhibit at 3 o’clock. Dang, I didn’t plan Vienna very well. We go back to the hotel to get ready for dinner and the show. 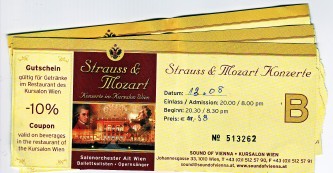 Kaitlyn finally gets a chance to wear her nice dress. The guy we bought the tickets from told us there is a restaurant at the Kursalon in Stadtpark, where the show is being performed. We eat there before the show. It is really nice. 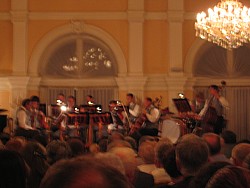 The show’s not half bad. It is clearly a tourist trap, but it is nice and elegant. The announcer says that Strauss had performed in this Kursalon hall many times. They play some Strauss, some Mozart, some traditional Germanic boom-pah music, and they have a couple of dancers perform during a few songs.

After an hour is intermission, and we decide we’ve had our fill. On our way home, we waltz (stumble) in the streets a little. Kaitlyn and I have some hot chocolate at Starbucks afterward.

< Back
Venician glass
Next >
Die Schweiz
by:
Gary Faircloth
http://arkadianriver.com
Opinions expressed are his own and don't necessarily reflect the views of the company he works for or its members. Interests: tech, science, history, PC Gam...SQUIRREL!