“Would you like milk in your cereal bowl?” “No, coffee please; I’m French.” Yep, we learn that in many French homes, breakfast consists of a bowl of coffee in which you dunk your buttered baguette. It’s awesome. So, after a couple of bowls of coffee, I was ready to go! 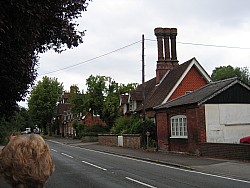 Very old. A simple town. We take a nice morning stroll past houses that are 500-600 years old. This church in Hursley looks active, but Isabelle tells us that many churches throughout the UK have long outlived the congregations and have been used for various purposes, such as to serve as apartments. We chuckle thinking of the people who like having stained glass for a living room window and a cemetary for a garden.

This town has a nice long pedestrian-only street for shopping. Along this street, we stop in a drugstore and have lunch in a pub that has been around for 1000 years! The beer I drink is an ale (no foam), and I don’t like it much. But I’m not a big beer drinker. We see another customer served Bangers and Mash. The plate was filled with a 2-inch thick, 11/2-foot long curl of yummy-looking sausage atop about 3 cups of gravy-smothered mashed potatoes! Hefty. 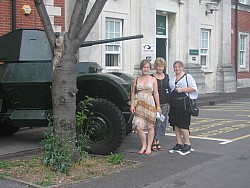 After lunch we head to the Winchester cathedral, passing a wedding party in the garden along the way. This cathedral was used as a set in the movie The DaVinci Code because Westminster Abbey refused to allow filming there. With a £7 entry fee, we decide to only get pictures from the entrance hall. Leaving the church, we notice some kids hanging out with the dead. They don’t look goth; they’re just hangin’. As we continue our walk, we come across a church that has outlived its congregation to become something else: a movie theater.

After walking down cobblestone streets past old walls made from flint rock and through a park, we arrive at an old Army post turned into apartments. We find my street. ;-) 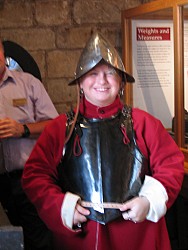 We walk on to the supposed site of King Arthur and his round table. We climb a tower where Christina has fun trying on some armor. The tower is old and authentic. One of the sides is fully intact, including its arrow slit. By now, everyone’s feet hurt. It’s time to head back. 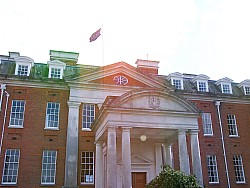 On the way back from Winchester, we stop at the IBM Hursley site, where Patrick works. The main building is very old and a monument in its own right; behind the building there are tennis courts and a golf course on the IBM property. Sweet.

We’re staying in London tonight, so we need to allow enough time to return the car and get into town. I wish we could spend more time with them. We pack up and Patrick tells us of a nice place to shop while in Paris.

I can’t find a gas station to fill up anywhere. We turn in the car half full and take a cab to London. The driver is great. We have a flat rate of £40 and there are two ways to go to our hotel, which is over by the tower bridge. He chooses to go the slightly longer route on the north side of the Thames so that he can give us a tour of the city. We pass by The Natural History museum, Buckingham, Westminster, along the Thames, then over the Tower bridge to our hotel. The hotel is nothing fancy. It’s a Premier Travel Inn, an English chain similar to US chains, like Best Western. It’s comfortable. We get one room with two single beds and two single mattresses on the floor for the girls. I wash some things in the sink and let them drip dry. Socks and undies don’t dry very well. But the thin shirts are okay. This serves as a lesson for later. Bring enough socks! We eat at the hotel. We sleep.

< Back
Château Dantressangle
Next >
Hello, London
by:
Gary Faircloth
http://arkadianriver.com
Opinions expressed are his own and don't necessarily reflect the views of the company he works for or its members. Interests: tech, science, history, PC Gam...SQUIRREL!